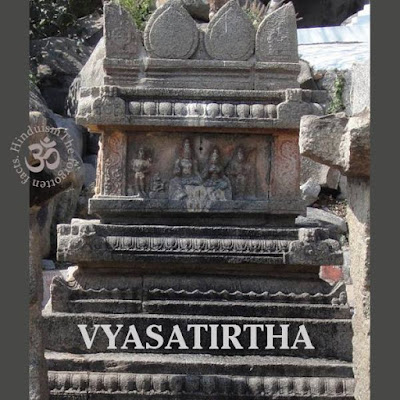 Otherwise known as Vyasaraya and Vyasaraja Swamin, as we briefly mentioned, he was the disciple of Brahmanya Tirtha. Born around 1460 AD in the village of Bannur in Mysore District, his father's name was Rallanna Sumati and his gotra was Kasyapa. As previously stated, he took his birth by the blessings of Brahmanya Tirtha. Altogether, Vyasatirtha's parents had three children, a girl and two boys. In his childhood Vyasatirtha was known as Yatiraja. At the age of five he underwent the Vidyarambha samskara to begin his formal education, starting with writing the alphabet, and at seven took upanayana (the sacred thread.) He stayed at gurukula for only four years after that. At eleven he went to his home and continued his studies of poetry, drama and grammar for about five years. Before Vyasatirtha's birth, his father promised his second son to Brahmanya Tirtha. He gave the boy the name Yatiraja to indicate his future as a renunciate, and in due course he was given to Brahmanya Tirtha as an assistant. After some time, however, Yatiraja, being unsure of Brahmanya Tirtha's intentions, slipped away and ran into the forest and headed for the direction of "home," away from the hermitage. One night whilst sleeping in the forest under a tree, Lord Vishnu came to him and told him what to do. The teenager returned to the asrama hermitage that very same day, and shortly after this, upon proving his dedication to his guru, young Yatiraja was formally initiated and given the name Vyasatirtha.
Some time shortly after the two year famine of 1475 and 1476 Brahmanya Tirtha, his guru, left this world. Vyasatirtha came to the Vedanta Pitha about 1478 in his late teens. Due to his young age and little time spent with his guru, he didn't really know the conclusions of the Madhva sastras very well, so he went to Kancipuram to study, where, after a very short time, he became a renowned pandit. Whilst in that area he was entrusted with the worship of Shrinivasan (Lord Vishnu) at Tirupati. Vyasatirtha's Mutt is still at Tirupati on the hill (Tirumala). Before leaving that place, after about twelve years of being there, he gave the worship over to his disciples.
In local history corresponding to the time, it is mentioned that the King of Bisnaga used to listen daily to a great Madhva Vaishnava sannyasi who had never married or touched a woman in his life. Though his name is not directly mentioned, history infers that this was Vyasatirtha.