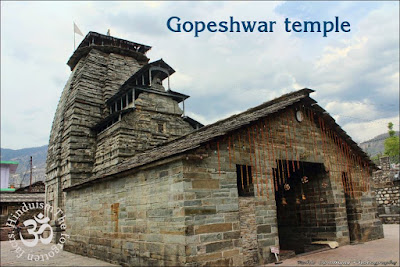 Gopinath Temple is situated in Gopeshwar village now part of Gopeshwar town. Gopinath Temple is an ancient temple dedicated to Lord Shiva, located at Gopeshwar, in Uttaranchal. The temple stands out in its architectural proficiency; it is topped by a magnificent dome and the 30 sq ft (2.8 m2) sanctum sanctorum, which is aessible by 24 doors.

The remains of broken deities found around the temple testify the existence of several more temples in ancient times. There is a trident about 5 m high, which dates back to the 12th century, in the courtyard of the temple made of eight different metals. It boasts the inscriptions attributed to Anekmalla, the king of Nepal who reigned in the 13th century. Four short inscriptions written in Devanagri, which dates back to a later period, are yet to be deciphered, baring one.

Legend is that the trident got fixed in this spot, when Lord Shiva threw it at Lord Kama to kill him. The metal of the trident is not weathered by the elements and this is a wonder. The legend goes that the trident belonged to Shiva who threw it at Kamdeva ( The God Of Love) to kill him and it got fixed in this spot. It is believed that while brute force can not move this Trident, the slightest touch by a true devotee can cause a tremor in it. The metal of the trident does not appear to have become weathered by the elements over the century.
Posted by Pradeep Singh at 12:20 PM

Email ThisBlogThis!Share to TwitterShare to FacebookShare to Pinterest
Labels: Gopeshwar temple in Uttarakhand