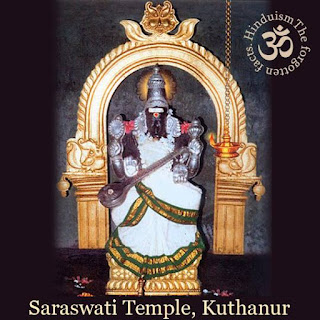 Saraswati is the goddess of learning and spouse of the Brahma, the Creator as per the Hindus. But, there are very few temples can be seen all over India, which is dedicated to this deity. Kuthanur is a small village the Tiruvarur district of Tamil Nadu, where an important temple dedicated to Saraswati can be seen. Kuthanur is situated on the banks of the Arasilar River, a branch of the Kaveri.

One can see a very charming deity of goddess in a seated yogic posture (padmasana) on a lotus in principal sanctum of this small Saraswati temple. She is seen having four arms. She holds the rosary (japamala) in her upper hands and the water-pot (kamandala), while one of her two lower hands is in the chinmudra (indicative of knowledge) and the other holds a palm-leaf manuscript. The processional image (utsava-murti) is in metal and is very much like the stone idol.

According to a story associated with this place, Ottakuttar, a famous Tamil poet who lived in the Chola times of the 12th century A.D. and a contemporary of Kamban, was associated with Kuthanur, where he performed penance to this deity. It is said that once he had a vision (darshan) of goddess Saraswati at this place and consequently became a great poet earning fame and name. It is said that this village was known as Kuthanur after the name of Ottakuttar. This Saraswati temple is said to be constructed by this poet. A statue of Ottakuttar can be seen at the entrance of this shrine in honour of his association of this place.

Every year, thousands of devotees visit this temple specifically on Saraswati Puja and Vijayadashami festivals to seek the blessings of this deity of Knowledge, who is believed to cure speech defects. Everyone places notebooks and pens in front of the deity as per the Hindu custom and then use them. Some people also offer white saris and lotus flowers to the goddess Saraswati. The Maha Kumbabhishekam of this Saraswati temple was performed after a long time in 2003.
Posted by Pradeep Singh at 12:32 PM