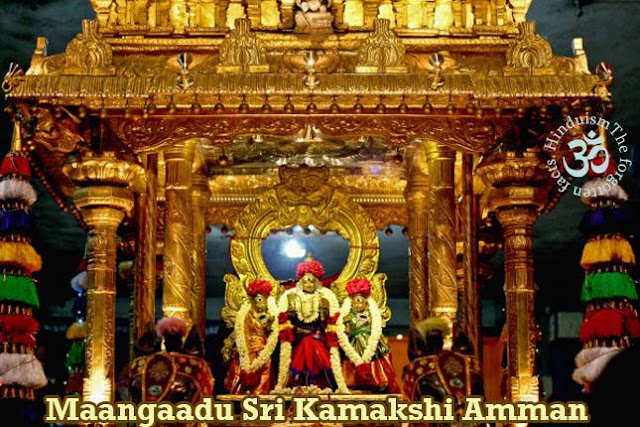 Maangaadu is a small beautiful village located at the outskirts of Chennai, Tamil Nadu near Poonamallee.

As per the legend, one day in Kailash, Parvathi Devi playfully closed the eyes of Lord Shiva from behind, with her palms. As a result of this, the whole universe was surrounded with darkness and all the living beings suffered. Lord Shiva became angry and the Goddess craved for his pardon.

Lord Shiva guided her to the earth and asked her to perform a severe penance to join him again. As per the God’s instructions she came down to earth and reached this place of dense Mango grove called Maangaadu. (means ‘Mango forest’ in Thamizh)

She started her rigorous penance here in the standing posture on the Panchagni (Fire). She stood one legged on Panchagni with right leg folded. She was holding her right hand raised above her head holding the Japamala (Rudraksha). Even today we can see this Moorthi of Sri Tapas Kamakshi at Maangaadu.

The idol Sri Aadhi Kamakshiamman made of Panchaloha (5 metals) was installed by Sri Kanchi Paramacharya Swami in the later years.

Six weeks worships are very popular here. The devotee who has some prarthana or wish can choose any one day of the week and to visit the temple along with 2 lemons, of which one will be retained at the temple and the other one has to be taken back home.

Again the following week, on the same day, he or she has to carry the old lemon from home along with 2 other fresh lemons. Like wise, if one visits on the same day for six weeks continuously, the Ambaal grants the wishes of the devotee.

Golden Chariot is very popular here which is pulled everyday between 6.30 and 7.30 pm.

Maangaadu is just 24 kms from Chennai city and is located off the Chennai Bangalore highway on the way from Poonamallee to Kunrathur.
Posted by Pradeep Singh at 12:38 PM