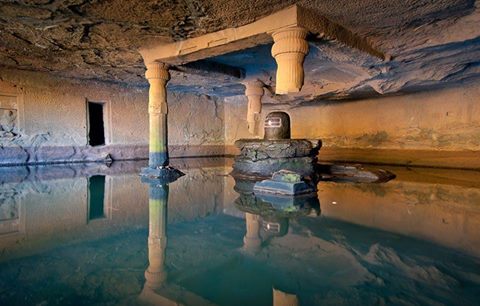 Kedareshwar cave temple (Ahmednagar) - an ancient prediction concealed in four columns
Kedareshwar cave temple is a small but very unusual shrine located in an underground cavern (on the banks of a sacred river known under the name Malganga) at Harishchandragad fort that is situated in Ahmednagar district.
This holy place is most remarkable and popular for its lingam (12 feet high Shiv ling) - a symbol of Lord Shiva, placed in the center upon a circular base that is surrounded by four stone columns and ice - cold water (4 feet deep).
According to the Indian legends, each of these columns is a queer representation of the four periods of development of the world within a four age cycle - the four Yugas, namely Satya Yuga (सत्य युग - epoch of truth), Treta Yuga (त्रेता युग - age of morality), Dwapar Yuga (aeon of understanding, love, mercy, kindness and truthfulness) and Kali Yuga (कलियुग - characterized as the era of darkness, vice and lies * this Yuga is our present time).
The duration of each Yuga decreases from the previous to the next (amount of years is shortened - they have a different length of time) - moral qualities such as knowledge, truth and goodness are reduced and negative virtues such as ignorance and evil increase.
Taken together, the four Yugas form a Mahayuga and seventy-one Mahayugas form a Manvantara - it is claimed that Manvantara is the period of the first man and legislator - Manu. Each Manvantara has its own king of the Devas - Indra, its specific Manu, its several deities and seven sages.
Fourteen Manvantaras create a Kalpa, after which the whole world approaches to its periodic destruction called Pralaya. The Yuga is regarded as a certain era or epoch, before which there is a period of twilight - Sandhi and after that a period of partial twilight - Sandhyansa.
There is a belief which states that at the end of each Yuga one of the columns breaks off - now there is only one pillar that is still intact - the one of Kali Yuga. The people in India believe that when this final pillar breaks, then the end of the world will come to pass. The walls of the cave are enriched with beautiful stone sculptures and various wall carvings depicting mythological scenes.