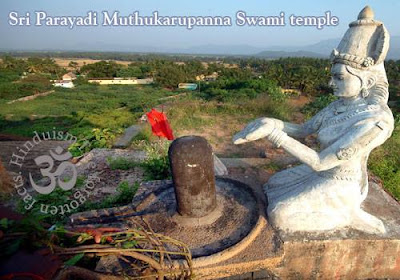 The deity of the presiding deity is made of Navapashana.

The vimana above the sanctum sanctum is of Padma design. Lord Mukthivinayaka blesses the devotees. Navagraha shrine is in the prakara. Nagar shrines are under Arasa Maram – Bodhi tree in the form of anthills. Deva Bhudhagan and Akasa Bhudhagan, the guardian deities are on both sides of the sanctum sanctum. Sri Agni Veerabadra appears in killing posture of Daksha. As He has all Shiva attributes, devotees offer the first worship to Agni Veerabadra and then to Karuppanar. In the hill behind the temple, Lord Shiva blesses the devotees as Akasha Linga on a square peeta. Mother Parvathi sitting in a meditating posture, is performing Shiva Puja with Lotus flowers, a rare darshan in this temple. The perennial Parayadi Theertham-holy spring is at the foot of the hills.

Presiding deity appears majestically with fine physical features, twisted moustache, Nama the Vishnu Tilak in forehead and holding a sickle. He is stamping a witch under His left leg and is holding his head. The face and chest of Lord is made of Navapashana. They use to fan the Swami from sweat. During the Arthajama Puja – the last puja at night, a water bowl is placed in the sanctum to quench the thirst of Lord. This water is offered as Theertha Prasad to devotees.

Next morning while opening the temple, the priest use to knock the door twice and wait for a while. He again knocks then as if seeking the permission of the Lord to open the doors, open and begin the pujas. Devotees call the Lord Aiya as if calling their fathers.

No abishek is performed on Lord. To soften the fury of Lord, they use to burn the Darba grass on new moon days, mix it with some cosmetic powders and five varieties of oil and apply it. Butter is applied on full moon days. They offer seven varieties of fruits as nivedhana, which then is offered as Prasad to devotees. As the Lord would be furious during the oil application time, children and women are not allowed in the shrine.
As the Lord of the temple is the personal bodyguard of Lord Shiva, special pujas are dedicated to Him on Shivrathri night. They offer the plantain tree skin (mattai in Tamil). This is also offered as Prasad. It is believed that this Prasad would bless families with continued generations. Akasha Bhudagan and Deva Bhudagan, the securities in the sanctum sanctorum are colossal in size with sickle and dandas in their hands.
Lord Dakshinamurthi appears in yoga posture. There are no banyan tree, Muyalagan at His feet and disciples. He is holding flowers in His upper hands. Those who need relief due to Jupiter transition effects pray here.

There was a Shiva temple at the top of the hills in ancient days. Muthukaruppanna Swami was the security to Lord then. When a witch hunt tried to take Lord Shiva from here, Muthukaruppannaswami prevented his attempt and killed him. He then stayed here for ever. The Shiva temple at the top of the hill disappeared in the days followed. Muthukaruppannar Himself became popular then in the region. A temple was built then. As He is under the rock – Parai in Tamil, He is named Parayadi Muthiah.
Posted by Pradeep Singh at 12:25 PM