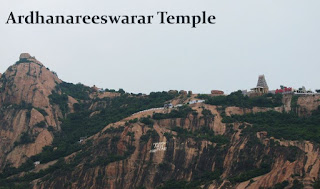 Temple is on the hill which is red in color. One can take on 1206 steps to reach the top of the hill to worship the Lord Shiva-Ardhanareeswarar. Cars and taxis are available to reach the temple. The Rajagopuram is five tiered; 260’ in length and 160’ east-west breath. The period of the temple dates back to sangam period and renovated during the periods of cholas, pandyas and nayak kings. A British officer, Davis, repaired some parts of temple. We can see his image in Mukkoottu Vinayagar temple.Tirugnanasambandar wrote ‘Tiruneelakanta Pathigam’ and Arunagirinathar is believed to have written ‘Tiruppugalh’ in this temple.
Ghat road and steps
If we do not prefer to take up the motorway-road up to the top, we have another choice to walk up the distance. One cannot miss the long 60’ red colored snake carved along the steps. People worship Adi Seshan-the snake. The path has 11 mandapams-providing shelters to people going up the hill.
We come across Pasuvan Swami Mandapam on way to top. The people from villages offer milk, ghee or cheese to Pasuvan Swami so that their homes could become abundant with these produce.
Ardhanareeswarar Temple
One has to enter the temple from the main entrance-Rajagopuram-from the south; sanctum sanctorum faces west. In this temple Lord Shiva appears in man-woman combination in one idol; the right part of the idol is half of Parvathi Devi and the left half is Lord Shiva’s half. There is a saying that wife is the better half; True to the saying, here Lord Shiva has given his left part of body to goddess Parvathi, his wife . It means that there is no Shiva without the Sakthi; and no sakthi without Shiva. All men and women are equal. No man without woman; no woman without man. An undeniable law of nature! So the main deity is called Umai Oru Bagan, Ammaiappan, Mangaipangan and Madhorubagan.
There is a natural fountain in sanctum sanctorum.
Tichengottuvelavar
This temple is dedicated to Lord Muruga. It attracts more devotees. People name their babies after lord Murugan’s name- Sengottuvelan. A common name we can come across in and around Erode and Namakkal!
Pujas
Pujas are performed as per agamas. The midday puja-Utchi kala puja-is famous. The villagers around the town could reach the temple only during the day time with fresh flowers, milk, butter and other fruits. This happened when there was no motorway or road. Still this puja is very important in this temple.
Festivals
New Moon days and Full Moon days attract more devotees to the temple. Vaikasi is important month. Ardhanareeswarar comes down to the town down below. The town wears festive look and people throng from all over Kongu region during these days for the darshan of the Lord.However all months have festivals because of the presence of other deities like Adi Kesava Perumal, Sengottuvelan, Sakthi and Pandeeswaran. Girivalam is also becoming famous.
Legends
Once Lord Adi Kesava perumal instructed Goddess Sakthi to go on penance to attain oneness with Lord Shiva. On Kedara Gowri day the wish came true. Lord Shiva appeared as Umai Oru Bagan allowing Goddess Sakthi to be the left part of him.Another story involves Vayu and Adi Seshan. Adi seshan was In the Meru Mountain ranges. A fight started between Vayu-the lord of Air and Adi Seshan-the lord’s snake. Vayu tried to blow away the mountain. In the fierce war, Vayu successfully blew a part of
Meru
This part fell in the Kongu region with Adiseshan clinging to it hurt and bleeding. That is the reason the color of 60’ feet snake is red. The hill is also red and yellow colored.
Beliefs
There is small shrine for Pandeeswarar on the hill. People offer cradles and they believe that they can have children.On the way to temple, the sixtieth step is considered as step of Honesty and truth-that is sathiyappadi. When people had problems and litigations among them, one who was ready to tell the truth from this place was believed to be the true and honest person; his evidence played vital role in delivering justice in those days.Pasuvan Swami attracts many farmers and villagers. They offer milk, butter and curd to Lord in a deep belief that this would be returned abundantly and richly.Many people who have Nagadosham offer abishegams to Adiseshan with turmeric and kumkum. It is generally believed that they are blessed with marriage soon.
Posted by Pradeep Singh at 11:38 AM