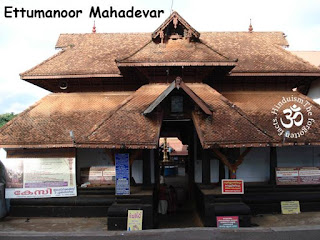 Ettumanoor Mahadeva temple is an ancient Shiva temple in Kottayam, Kerala, India. It has brought glory and fame to the place. Myths have it that the Pandavas and the sage Vyasa had worshipped at this temple. The name of the place has its origin from the word 'manoor', which means the land of deer. The temple is one of the major Shiva temples in Kerala counted along with the Shiva temples of Chengannur Mahadeva Temple, Kaduthruthy Mahadeva Temple, Vaikom Temple, Ernakulam Shiva Temple and Vadakkunathan temple.

The present temple building, with its gopuram and the fortress around it, was reconstructed in 717 ME (1542 AD). There are Dravidian mural paintings on the walls inside and outside of the main entrance. The fresco of Pradosha Nritham (Dance of Shiva) is one of the finest Wall painting in India. There is a golden flag staff inside the temple. On the top of it is the idol of a bull surrounded by small bells and metal leaves of the banyan tree and in terms of architecture this temples stands out to be an ultimate testimant for the vishwakarma Sthapathis, for their engineering skills. The temple roofs are covered with copper sheets and it has 14 ornamental tops. Bhagavati, Sastha, Ganapathy and Yakshi are installed here as subordinate deities. It is believed that the great philosopher, Adi Sankaracharya wrote 'Soundarya Lahari' while staying in the temple.

The origin of ETTUMANOORAPPAN is from Kattampakk, a small village in Kottayam district.

Ettumanoor Mahadeva Temple hosts the arattu festival celebrated on a grand scale on the Thiruvathira day in February–March every year. Lot of people come to this temple on the 8th and 10th day of the festival when seven and half elephants (in Malayalam: ezharaponnaana) made of gold (nearly 13 Kgms) will be held in public view. This statue was donated to the temple by a travancore maharaja. The temple, one of the wealthiest Devaswoms in Kerala, has many valuable possessions.

The Thulabharam is one of the important rituals of this temple. People make offerings to God for favours received. On balance, the child or man for whom offerings were promised to God, is weighed against offerings ranging from gold to fruits.
Posted by Pradeep Singh at 12:15 PM