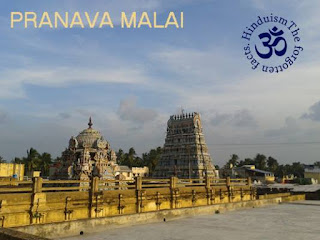 It dates back to the times of Pallavas and Tirupporur is known by different names like Poriyur or Yuddhapuri or Samarapuri. There are many legends related to Tirupporur and one of them relates to Lord Shiva relieving Lord Vishnu and his consort Lakshmi from the curse of Kanva rishi. This Lord Shiva and his son Murugan are worshipped here. According to the Sthalapurana, it was here that Lord Murugan with his consorts Valli and Devayanai granted protection to the demi-gods and explained the true meaning of Pranava or the real truth to them and Agastya Muni. Thus, the hill behind the temple is known as 'PRANAVA MALAI ', where Lord Vishnu is said to have worshipped Lord Shiva. Legend also has it that Skanda worshipped Shiva as Vanmeekeswara to rid himself of the sin of having killed Soorapadman.

Tirupporur got lost into oblivion until it was rediscovered in the 17th century and was renovated by Chidambara Swamigal. The idol of Lord Murugan is said to be the 'Swayambhu Murti', (not made by the hands of a man) and was found by Chidambara Swamigalin in an anthill. The temple enshrines Skanda in several forms based on the legends of Skanda Puranam. To the east of the temple the the 'Palmyra' tree and the anthill where the image of Skanda was found can be seen. The anthill is now covered with Kavacha (armor) and other jewels. The other things enclosed in the temple premises are a 24-pillared hall, a 30-pillared circular hall, a shrine to 'Vembadi Vinayaka' under a Neem tree

Stala Theerthams : 'Saravana Poigai' and 'Valliyar Odai' to the south of the temple, and another Teertham known as 'Pranavamritam'.

Location : Tirupporur is 45 km from Chennai
Posted by Pradeep Singh at 12:04 PM