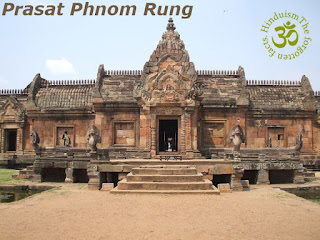 Khao Phnom Rung is an extinct volcano which has been dormant for 900,000 years. Situated in Buriram Province in the Isan region of Thailand. .When the sanctuary was built on the top of Khao Phnom Rung, slight alterations were made of the crater, and it was turned into a huge reservoir with sufficient water supply for consumption. Phnom Rung has been the original name of the mountain itself and the sanctuary on top of it since at least 989 or the 11th century A.D. The word appeared in 4 Khmer alphabet inscriptions written in the Khmer language discovered at Prasat Phnom Rung. The word "Phnom Rung" derived from a Khmer word "Vnam Rung" which means a large mountain, the same meaning as the words "s-Thuadri" and "S-Thula Saila" in other Khmer alphabet inscriptions written in the Sanskrit language. Prasat Phnom Rung is a sanctuary dedicated to the pasupata sect of Saivaite Hinduism, which believed in the God Siva. The construction of Prasat Phnom Rung on the top of the mountain was, therefore, compared to that of the God Siva's residence, which is belived to be situated on the top of mount Kailasa. The buildings within the complex of Prasat Phnom Rung can be divided by chronological order into 4 periods. The most ancient are the two brick towers of Koh Kare style built around the 10th century A.D. The second period is attested by Prasat Noi, which was built around the 11th century A.D. in Baphuon style. The third period is when most of the structures within the complex were constructed including the main tower around the 12th century A.D. in the Angkor Wat style. The last period is apparent from the two late-rite libraries or Bannalai built between the 12th-13th centuries A.D. in the Bayon style.
Posted by Pradeep Singh at 12:29 PM