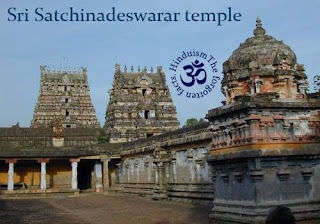 Lord Shiva is a swayambumurthy. Honey abishek is performed for Pralayam Katha Vinayaka ( Vinayaka who protected from deluge) on Vinayaka Chaturthi festival day. The wonder is that the honey used for abhishek does not pour out.

On the Vinayaka Chaturthi day, Lord Pralayamkatha Vinayaka abishek is performed with honey. The wonder is that the honey used for abishek does not flow out. No abishek is done during other days.

This is one of 24 sacred places attributed to Lod Dakshinamurthy. Sage Agasthya, Brahmma, four Sanakathi rishis and Sage Viswamitra worshipped here. King Haridwajan, suffering from a disease called Muyalagam due to the curse of Sage Durvasa got cured in this temple by the grace of Lord Shiva.

Lord was too merciful to grant His darshan in the form of Dakshinamurthy to a poor wood cutter who was carrying fuel to the temple from the banks of the tank in the east of the temple.

The Shivalingas worshipped by Nalvar – Ganasambandr, Tirunavukkarasar, Sundarar and Manickavasagar – Agasthya, Pulasthya, Sanaka, Sananthana and Vishvamitra are in line in the first corridor (prakara) of the temple. The temple for Mother-Goddess Karumbanna solli is in the second prakara. Dakshinamurthy temple is on the banks of the tank in the east.

Sthala Vinayaka – Vinayaka of the place: He is fair in complexion. Though it is said that there are Sthalapurana and another literature called Ulanool, no edition is now available. Also only 10 verses are available from the Purambayamalai authored by Pandit Sundaresa Wandayar.

As the place could not be destroyed by Pralaya the deluge, an exception to this natural rule (Prambu), the place is called Tiru-Purambiam. Deluge could not cover this place. The place is also known as Kalyanamanagar and Punnahavanam.

A girl, Rathnavalli by name came to this place with a youth arranged by the parents for her marriage, came to this place before their marriage due to force of circumstances. Unfortunately, the youth died of snake bite but was restored to life by Saint Ganasambandar who was incidentally present in the place. He also conducted their wedding, with Lord Shiva and the Vanni tree as witnesses.

As Lord Shiva was witness (Satchi) to the marriage, He is praised as Satchinathar. The Vanni tree is in the second prakara. This episode finds a chapter in Tiruvilayadal Puranam (an epic on Lord Shiva written by Paranjothi Munivar) and also in the Sthalapurana.
Posted by Pradeep Singh at 12:00 PM