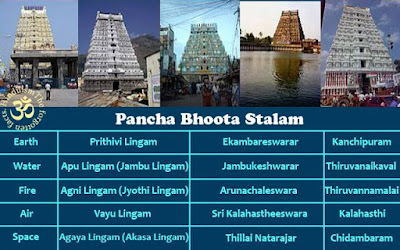 In Tiruvannamalai temple, Shiva is said to have manifested himself in the form of massive column of fire, whose crown and feet could not be found by the Hindu God of creation, Brahma and Hindu God of preservation (or maintainer) Vishnu. A celebration of this manifestation is seen even today in the age old traditions observed during the festivals of Sivarathri and Karthigai Deepam. Agni Lingam explains the mythics of life - duty, virtue, self-sacrifice and finally liberation by and through ascetic life -duty, virtue, self-sacrifice and finally liberation by and through ascetic life at the end of Agni kalpa. In Thiruvanaikaval temple, Shiva represents water element where the appu lingam is submerged in water and a perennial sub terrain spring gushes around the lingam. In Chidambaram, empty space is worshiped as Shiva (akasha lingam) to signify God is beyond human comprehension. It is unusual where there is no physical stone lingam present, unlike other temples of Shiva.
— with Nyanassankar Thangavelu.
Posted by Pradeep Singh at 12:33 PM