Jageshwar is a Hindu pilgrimage town in Almora district, Uttarakhand, 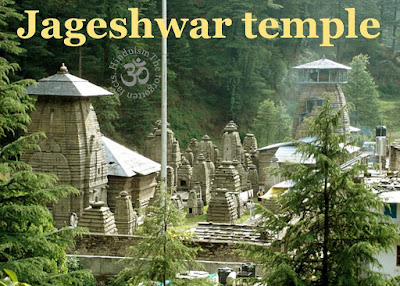 Jageshwar is a Hindu pilgrimage town in Almora district, Uttarakhand, believed to carry the Nagesh Jyotirlinga dedicated to Shiva, located 36 km northeast of Almora, in Kumaun region. The temple city comprises a cluster of 124 large and small stone temples, dating 9th to 13th century AD, with many preserved by the Archaeological Survey of India (ASI), which include Dandeshwar Temple, Chandi-ka-Temple, Jageshwar Temple, Kuber Temple, Mritunjaya Temple, Nanda Devi or Nau Durga, Nava-grah temple, a Pyramidal shrine, and Surya Temple, amongst which the oldest shrine is the Mrityunjaya Temple and the biggest shrine is the Dandeshwar Temple. Once the centre of Lakulish Shaivism, Jageshwar is located at an altitude of 1870 mts, in the Jataganga river valley near a Deodar forest (Cedrus deodara) starting from Artola village on Almora–Pithoragarh highway, where two streams Nandini and Surabhi flow down the hills in the narrow valley and meet near the sacred spot.

Most Hindus believe that Jageshwar is the place of Nagesh, 8th among the Dwadasa Jyotirlingas (the twelve resplendent lingas of Shiva established by Vishnu), which is stated to exist in the forest of Deodar or daruka (Sanskrit: दारूक वन, transliteration: daruka van) -

The ancient treatise Prasadmandanam describe this place as an abode of Shiva:

Jageshwar was once the center of Lakulish Shaivism (Lakulish is 28th Avatar of Shiva). Origin and history of Lakulish (Shiva with a wooden Stick) traverse back to Gujarat region of current India. The resemblance between Kumaoni language and Gujarati language probably hints at the fact that followers of Lakulish settled at Jageshwar. Local folklore still talks about a man who will walk this place with a wooden stick in his hand.

There is no definite dating of the construction of Jageshwar group of temples but according to the ASI, they belong to the post-Gupta and pre-medieval eras and are estimated to be about 450 yrs old. These temples range in the period from the 8th century (early Katyuri Dynasty) to the 18th century (Chand Dynasty). The temples were renovated during the reign of Katyuri King Shalivahandev. There is an inscription of Malla Kings on the main temple premises indicating their devotion to Jageshwar. The Katyuri Kings also donated villages to the temple priests for its maintenance. The Chand Kings of Kumaun were also patrons of the Jageshwar temple.

Numerous Jageshwar temples were constructed or restored during the Gurjara Pratihara era.

It is believed that Adi Shankaracharya visited Jageshwar and renovated and re-established many temples before leaving for Kedarnath. The Samsan ghat of Jageshwar is also the cremation ground of the erstwhile Chand Kings. It is possible that sati, the act of self-immolation, may have been performed here. The temples architecture belong to the Nagara [this link is not to an appropriate entry] style, characterized by a tall curved spire surmounted by an amalaka (capstone) and a kalasha crown. Most of the temples enshrine a stone lingam, surrounded by stone sculptures of various deities. The pilgrimage to Jageshwar was considered as sacred as the famous chardham yatra.

Before the construction of roads, pilgrims passed through Jageshwar en route to Kailash and Mansarovar. Due to the restrictions on pilgrimage to Kailash Mansarovar in the past, pilgrims were diverted towards Kedarnath; however, this center has re-attained its past glory.
Posted by Pradeep Singh at 12:23 PM

Email ThisBlogThis!Share to TwitterShare to FacebookShare to Pinterest
Labels: Jageshwar is a Hindu pilgrimage town in Almora district, Uttarakhand