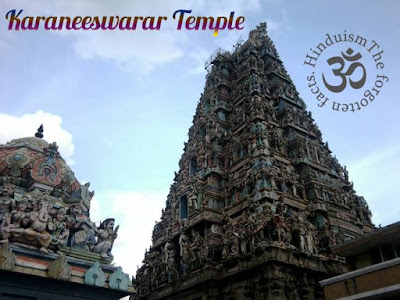 The Karaneeswarar Temple is a 12th-century Hindu temple in the neighbourhood of Mylapore in Chennai, India. The temple is dedicated to Shiva. The main deity is a Shivalinga. There are also shrines to Sarvamangala Vinayaka, Dandapani, Durga, Lakshmi and Saraswathi.

This temple is the abode of Lord Sri Karaneeswara and Mother Porkodi Amman.[1] The temple is located at Bazaar road in the middle stretch of the popular Kutcheri road in Mylapore. It is about half a kilometre from the famous Kapaleeswarar temple. From Sanskrit language, Karana means "cause". Karana + Iswara (Lord) = Karaneeswara, "the Lord who is the cause". The general belief is – He is the primordial cause of this universe which is His very form. He is also the Lord who can teach us the causality behind all events.

Lord Karaneeswara is more than happy to grant material boons as well. The worship of Sri Karaneeswara and Mother Porkodi blesses one with a happy family life; there will be much amicability amongst all members of the family. Mix coconut oil, sesame oil (gingelly) and castor oil in equal parts and use this mixture to light oil lamps in multiples of six (6, 12, 18, 24 and so on) in this temple. Pradakshinam (circling the temple) is also very important here. The temple is worth visiting for its calm environment.

Karaneeswara temple is one of the Sapta Sthana Shiva temples in Mylapore (one of the seven sacred Shiva temples in Mylapore). As per the legend, there used to be a young Brahmin in Mylapore who used to perform poojas to Shiv Linga. Through his penance, the young Brahmin found out that Lord Shiva was the cause of creation, protection and destruction of this universe. Thereafter, the Shiv Linga (the main deity of this temple) was called as Karaneeswara. (Karaneeswara means one who has causes). Even though there is no solid proof, it is widely believed that this temple might belong to the 12th century AD.

The main deities of the temples are Karaneeswara (Shiva) and his consort Porkodi Amman. Both the deities are found in two separate shrines. The temple has a small tower and as per the tradition followed in all old South Indian temples, this temple also has bali peeth, flag staff and Nandi idol facing the main shrine. The entrance of the main shrine has the idols of Ganesha and Dhandayudhapani (Subramanya).

The following shrines are also found in this temple:

The following deities are additionally found in this temple:

The belief is that a visit to this temple would cure you from all your diseases.
Posted by Pradeep Singh at 12:26 PM