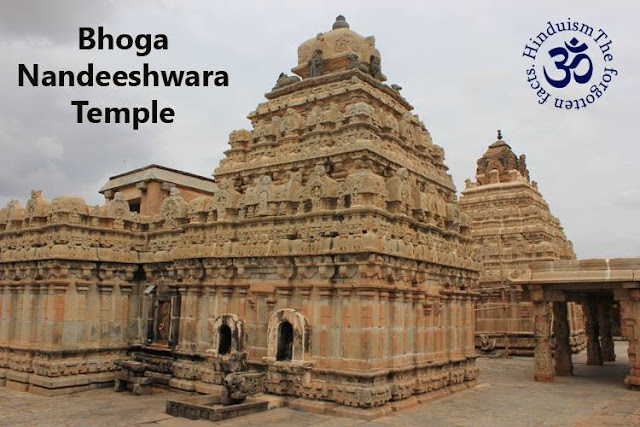 Bhoga Nandeeshwara Temple (also spelt "Bhoga Nandishwara" or "Bhoga Nandishvara") is a Vedic temple located in Nandi village, at the base of Nandi Hills (or Nandidurga) in the Chikkaballapur district of Karnataka state, India. It is dedicated to Lord Shiva.

The original temple in the complex, identified as one of the oldest temples of Karnataka, dates back to the early 9th century. The earliest inscriptions referring to the construction of the temple for Shiva, according to the Archaeological Survey of India, are from Nolamba dynasty ruler Nolambadiraja and the Rashtrakuta emperor Govinda III dated c.806, and copper plates of the Bana rulers Jayateja and Dattiya of about c.810. The temple was later under the patronage of successive notable South Indian dynasties: the Ganga Dynasty, the Chola dynasty, the Hoysala Empire and the Vijayanagara Empire. In the post medieval era, the local chiefs of Chikaballapura and the rulers of the Mysore Kingdom (Hyder Ali and Tipu Sultan) controlled the region before it eventually came under British rule after the death of Tipu Sultan in c.1799. The architectural style is Dravidian. The temple is located at a distance of 60 km from Bangalore. The temple is protected as a monument of national importance by the Archaeological Survey of India.

The temple complex has two large shrines: the "Arunachaleswara" shrine to the south built by the Gangas of Talakad, and the "Bhoga Nandeeshwara" shrine to the north built by the Cholas. It has the sculpture of a king considered to be that of Rajendra Chola. In between there is a small intervening shrine called with "Uma-Maheshwara" shrine with a kalyana mantapa ("marriage alter") supported by ornate pillars in black stone with reliefs depicting of the Hindu gods Shiva and his consort Parvati, Brahma (the creator) and Saraswathi, Vishnu (the preserver) and his consort Lakshmi, the god of fire Agni and his consort Swaha Devi, and decorative creepers and birds in bas-relief. This is typical to Hoysala architecture.

According to the art historian George Michell, the temple is a typical 9th-10th century Nolamba construction with pilasters on the outer walls of the shrines, perforated decorative stone windows which contain figures, of a dancing Shiva (south wall of the Arunachaleshwara shrine) and Durga standing on a buffalo head (north wall of Bhoga Nandeshwara shrine). Pyramidal and tiered towers (shikhara) rise from the two major shrines. Each major shrine has a large linga in the sanctum (the universal symbol of the god Shiva) with a sculpture of Nandi (the bull) in a pavilion facing the shrine. According to Michell, during the 16th century Vijayanagara period, a pavilion with elegant pillars was added in between the two major shrines. The pillars crafted out of grey-green granite have relief sculptures of attendant maidens. Michell feels the minor "Uma-Maheshwara" shrine was added in between the two major shrines (behind the pavilion) during the post Vijayanagara rule of the Gowdas of the Yelahanka dynasty. The minor shrine has a procession of deities and sages in wall relief. The wall that links the two major shrines was cleverly constructed so as to be in-distinguishable from the two original shrines. A spacious pillared hall was also added in front of the two major shrines.

The "Arunachaleswara" and the "Bhoga Nandeeshwara" forms of Shiva represent, according to Hindu legend, two stages in the life of the god Shiva: childhood and youth. The "Uma-Maheshwara" shrine has relief depicting the third stage, Shiva's marriage to the goddess Parvati. Hence this shrine is popular with newly weds who come to seek blessing. The Yoga Nandeeshwara temple on top of Nandi hills represents the final "renunciation" stage in the life of Shiva and hence this temple is devoid of any festivities.The large shrines each have a sanctum (garbhagriha), a vestibule (sukanasi) and a closed hall (navaranga or mantapa). The vestibule and hall are provided with perforated stone screens called Jali. Each shrine has a nandi mantapa in front (hall with the sculptured image of Nandi the bull) facing the sanctum. The outer bounding wall (prakara) of the complex has two minor shrines for Devi, the female form of divinity ("divine core of all Hindu goddesses"). To the north of the shrines is a second compound with a navaranga mantapa (pavilion) with Yali pillars. Beyond this compound is a large stepped temple tank (kalyani or pushkarni), locally called "Sringeri Teertha" (the mythical source of the Pinakini river) where lamps are lit on certain festive days.