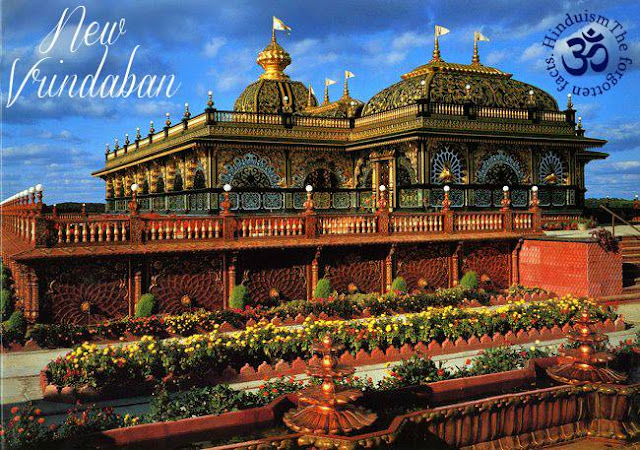 New Vrindaban is an unincorporated area and ISKCON (Hare Krishna) intentional community located in Marshall County near Moundsville, West Virginia. The town consists of 1,204 acres (4.87 km2) (of which 0.1 km2 is of water),[3] and several building complexes, homes, apartment buildings, and businesses including the Sri Sri Radha Vrindaban Chandra Temple (RVC Temple) and Prabhupada's Palace of Gold. New Vrindaban was founded in 1968 under the direct guidance of A.C. Bhaktivedanta Swami Prabhupada and named for the Indian city of Vrindavan.

The community was founded in 1968 by Kirtanananda Swami and Hayagriva Swami, two early disciples of A. C. Bhaktivedanta Swami Prabhupada. New Vrindaban developed under the guidance of Kirtanananda Swami (honored as "Srila Bhaktipada" after March 1979), and by the mid-1970s the live-in population had grown to over 100.

ISKCON New Vrindaban is strictly vegetarian and believes that meat consumption creates negative karma. Alcoholic beverages and illegal substances (such as drugs) are prohibited in the main Holy sites around the Temple of Understanding Circle Drive.

In October, 1986, a census report showed 377 adults living at the community.

On March 16, 1987, during their annual meeting at Mayapur, India, the ISKCON Governing Body Commission expelled Kirtanananda from the society for "moral and theological deviations." The community of New Vrindaban was expelled from ISKCON a year later.

After Kirtanananda Swami left New Vrindaban, and new leadership stabilized, the community was readmitted to ISKCON. The Pittsburgh Tribune Review reported in 2006 the population stood at about 100. However, this number only indicated how many people were members listed in the community directory rather than official census numbers.
Posted by Pradeep Singh at 12:40 PM