STUNNING FEATURES OF ARCHITECTURAL EXCELLENCY:
The place where temple located is the center point of world’s magnetic equator.

Three of the five Panchaboothasthala temples, those at Kalahasti, Kanchipuram and Chidambaram all stand on a straight line exactly at 79 degree 41 minutes East longitude -truly an engineering, astrological and geographical wonder. Of the other two temples, Tiruvanaikkaval is located at around 3 degrees to the south and exactly 1 degree to the west of the northern tip of this divine axis, while Tiruvannamalai is around midway (1.5 degree to the south and 0.5 degree to the west).
The 9 gateways signify the 9 orifices in the human body.

The Chitsabai or Ponnambalam, the sanctum sanctorum represents the heart which is reached by a flight of 5 stairs called the Panchaatchara padi – pancha meaning 5, achhara – indestructible syllables – “SI VA YA NA MA”, from a raised anterior dias – the Kanakasabai. The access to the Sabhai is through the sides of the stage (and not from the front as in most temples). The Chit sabha roof is supported by four pillars symbolic of the four Vedas . 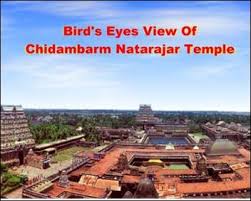 The hall next to the artha mantapa has eighteen pillars symbolizing the eighteen Puranas .
Sri Nataraj Mandir at Satara is a replica of this temple.

Posted by Decoding Hinduism at 4:27 PM

Email ThisBlogThis!Share to TwitterShare to FacebookShare to Pinterest
Labels: NATARAJA TEMPLE OF CHIDAMBARAM