Murudeshwara temple in the Bhatkal Taluk of Uttara Kannada district in the state of Karnataka, India.

Murudeshwara temple, dedicated to Lord Shiva, lies in the holy beach town in the Bhatkal Taluk of Uttara Kannada district in the state of Karnataka, India. Situated between the Honnavar and Bhatkal town(about 12kms) The statue of Shiva here is the world’s tallest and it lies on the coast of the Arabian Sea.
Murudeshwar, the temple town with a vibrant scenic beauty and golden history, is located on the Arabian seafront in North Kanara Dist, Karnataka. It is situated on the NH-17, about 160 kms north of the port city of Mangalore.

But the most picturesque and memorable experience would be to reach Murudeshwar from Mangalore or Goa by Konkan Railway and alight at Murudeshwar railway station adjoining the National Highway. Many trains stop at this station.

Murudeshwar can be visited throughout the year. Each season brings out a different hue of the coastal town.

The legend of Murudeshwar goes back to the age of Ramayana.
Ravana, the asura king of Lanka, wished to have the all powerful Atmalinga of Shiva, so that he can become invincible and immortal by worshipping it. Pleased by his severe penance, Lord Shiva gave him the Atmalinga but warned him not to place it on the ground till he reached his destination.

Upset by the thought that Ravana would become more powerful by worshipping the Atmalinga, the Gods devised a plan to take it away from Ravana. The Gods knew that Ravana being a pious devotee of Lord Shiva was punctual in performing the periodical rites everyday. 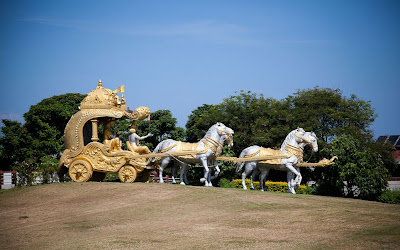 As Ravana approached Gokarna, Lord Vishnu blotted the sun with his Sudharshana Chakra. Thinking that it was evening, Ravana was in two minds whether to put down the Atmalinga or skip his evening rites. Just then, Lord Ganesh came to that place in the guise of a brahmin boy. Ravana called the boy and asked him to hold the linga until he completed his evening rites. The boy agreed on the condition that he'd keep the linga down if Ravana didn't return before the boy called out his name thrice. Ravana agreed and went about his rituals, but by then the boy called out his name thrice and place the Atmalinga on the earth, and it got firmly entrenched in the earth.
When Vishnu withdrew his Sudharshan chakra, Ravana saw bright sunlight and understood that he was tricked by the Gods. He became furious. He came to the Linga and tried to uproot it with all his might. But the idol did not budge even a liitle. The idol's shape now looked like a cow's ear. Hence, the place is known as Gokarna. [Go means Cow and karna means Ear in sanskrit.] The crest fallen Ravana was deeply upset and beat the boy on his head. In anger he pulled and threw the case of linga, which fell 23 miles away at Sajjeshwar. He threw the lid to the south 27 miles away at Guneshwara in the form of “Vamdev Linga”. He threw the cloth wrapped to the idol to south, 32 miles away at Kanduka hills on shore of sea. It took the form of “Aghora”at Murudeshwar. The thread winding the idol was flung to south at Dhareshwara, came to known as “Tathpurusha Linga”.

Shiva learnt all this from wind god Vayu. He came on earth along with Parvathi and Ganesha and visited all these five places and worshipped the linga. He declared that these would be his Panchakshetras and those who worshipped lingas at those places would be free from all sins and their wishes would be fulfilled and ultimately reach the abode of Shiva. 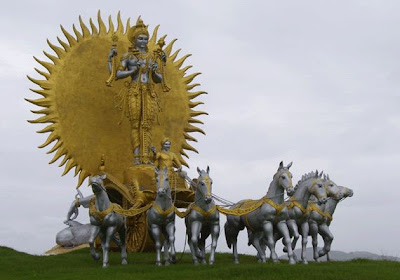 Murudeshwar is a pilgrim's paradise. Right from the monumental entrance arch, the divinity of the place envelops the pilgrim.

The Rajagopura at the entrance of the Temple is the world's tallest, standing at 249 feet. Inaugurated in May 2008, this mammoth structure is the latest addition to the Temple. The Gopura has 22 floors and is the only Gopura to be fitted with elevators.

Besides the temple, the pilgrim finds himself in the midst of numerous sculptures on the Kanduka hill. The Geetopadesha, Sun chariot, the sculpture of Lord Ganesh receiving the Atmalinga from Ravana in the form of a young boy, and others dot the landscape of the hill. On the very top is the Shiva statue. Beneath the statue is a cavern with impressive life-size sculptures depicting the story of Murudeshwar narrated through an impressive sound and light show.

Not just the Temple, Murudeshwar has a plentiful to appeal to the visitor. The scenic beauty of this coastal town is sure to relax and rejuvenate you!
The calm and wide sea soothes the senses even before you enter the water. A stroll along the seaside pathway with green landscape on one side and the sea on the other is the ultimate relaxation.

There's more for the children, and the child in the vacationer. There's a wavepool and waterpark also nestled on the hillock.

Definitely not to be missed on a trip to Murudeshwar, is the spectacular sunset across the sea on a clear evening. The best view would be from the Sunset Point next to the wavepool. 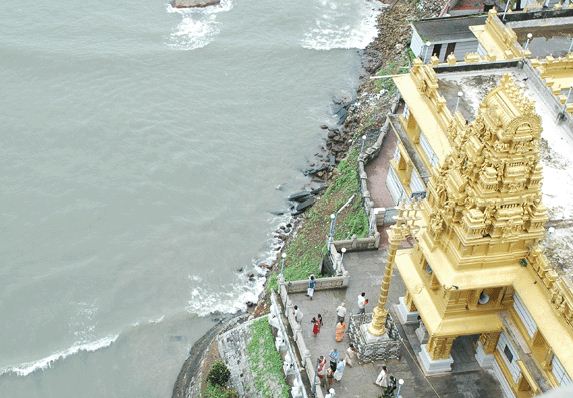 Road: Murdeshwar is one km deviated from the NH17 from Mangalore and 220 kms from Goa. There are private and state transport buses operating between Bengalaru and Bhatkal from Majestic.

Train: Murdeshwar lies in the Konkan stretch and many trains stop at this station, including express trains.

Email ThisBlogThis!Share to TwitterShare to FacebookShare to Pinterest
Labels: Murudeshwara temple in karnatka, Role of Temples in India, temples of india