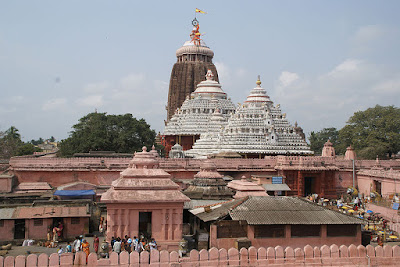 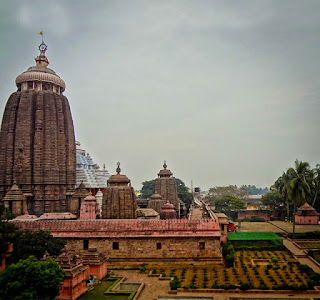 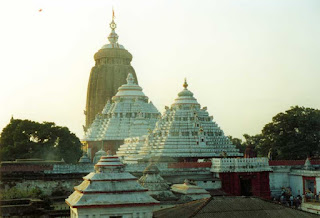 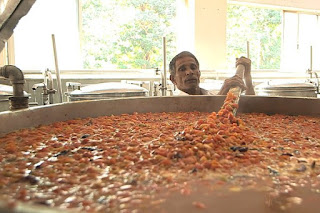 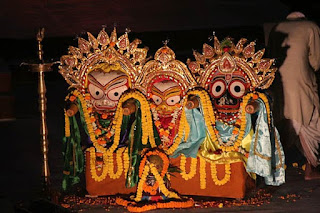 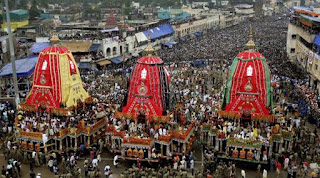 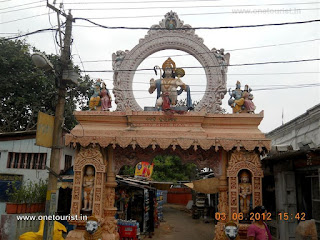 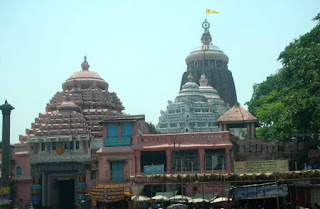 Puri is one of the four holy dhamas of India (The others are Dvaraka, Badarinath and Rameshvaram). It is located 60km from Bhubaneshwar, on the coast of the Bay Of Bengal.

Puri is called Sri Purushottama Dhama, the abode of the Lord Vishnu on earth. Other names are Sri Kshetra, Nilachala-dhama, Jagannatha-dhama, Yamanika-tirtha, Martya Vaikuntha, Nilagiri, Shankha-kshetra, Dasha-avatara-kshetra and Narasimha-kshetra. Puri is about 2 km wide and 4 km long.
The name Jagannath literally means the Lord of the Universe. King Indradyumna first established the temple of Lord Jagannath here on the Nilachala hill with the Deity being installed by Lord Brahma himself.
The present temple was begun by King Chora Ganga deva and finised by his descendant Ananga Bhima Deva during 12th century. The temple complex comprises an area of 10.7 acres and is enclosed by 2 rectangular walls. The outer enclosure is called Meghanada Prachira. The walls are 20ft high. The inner wall is called Kurma bheda. The walls were built during 15th or 16th century.
This temple has the largest kitchen in the world, and feeds thousands of devotees daily. The kitchen can prepare food for 1,00,000 people on a festival day and 25,000 is not unusual on a normal day.
There are 36 traditional communities who render a specific hereditary service to the Deities. The temple has as many as 6000 priests. There is a wheel on the top of the Jagannath temple made of an alloy of 8 metals. It is called Nila-Chakra (blue wheel). Everyday a different flag is tied to a mast attached to the Nila-Chakra. Every Ekadashi a lamp is lit on the top of the temple near the wheel.
Thirty different smaller temples surround the main temple. The Lord Narasimha temple adjacent to western side of the Mukti-Mandapa, was constructed before the present temple. In front of the main gate is an 11 m pillar known as Aruna Sthambha. This pillar was once in front of the Sun Temple in Konark. It was bought to puri during 18th Century. The figure on the pillar is Aruna, the Sun god's charioteer.
In the passage room of this gate is a Deity of Lord Jagannath known as Patita Pavana (Savior of the Fallen). This deity is visible from the road, so non-Hindus may take His Darshan.
There are 4 gates:
There is a carving of each form by the entrance of each gate. The Lion gate, which is the main gate, is located on the Grand side of the road.
The main Deities in the temple are Lord Jagannath, His brother Lord Baladeva, and his sister Subhadra. Some of the other temples within the walls of the temple house Deities of Sri Chaitanya Mahaprabhu, Lord Rama Chandra, Sakshi Gopal, Hanuman, Lord Narasimha, Lord Varaha and others.
Jagannath
Posted by Pradeep Singh at 6:41 PM No comments: