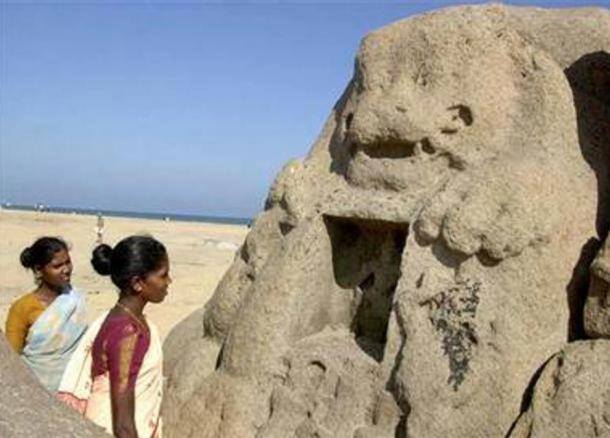 Mahabalipuram Rathas on the shores of the Bay of Bengal.

Mahabalipuram was a flourishing sea port in the times of Periplus and Ptolemy (140 AD). There is an old legend here that originally there were seven temples; of these, six have been swallowed by the sea and only one temple -the Shore Temple- remained. There are evidences of submerged structures under the waves and sporadic excavations are going on, but it is too early to say whether there really was a glorious city and six more temples which now lie submerged under the waves off the coast off Mahabalipuram

This historic town is located at about 60 kms away from south of Chennai. The structures are called Rathas because of their peculiar architecture and shape. The word ‘Ratha’ means the ‘chariot’. These temples are named after the presiding gods and their images in the temples.
Mahabalipuram is regarded as one of the archaeological wonders of India. The ancient carvings and the sculptures make for a wonderful experience of the glorious past of India. These age old architectures still influence the present Indian art and sculpture.
http://forum.xcitefun.net/mahabalipuram-shore-temple-bay-of…
http://www.indianholiday.com/…/five-rathas-mahabalipuram.ht…
See More
Posted by Decoding Hinduism at 12:41 PM No comments:

Email ThisBlogThis!Share to TwitterShare to FacebookShare to Pinterest
Labels: Mahabalipuram Rathas on the shores of the Bay of Bengal.
Older Posts Home
Subscribe to: Posts (Atom)