History of Mahasthangarh :-Mahasthangarh (Bengali: মহাস্থানগড় Môhasthangôṛ) is one of the earliest urban archaeological sites so far discovered in Bangladesh. The village Mahasthan in Shibganj thana of Bogra District contains the remains of an ancient city which was called Pundranagara or Paundravardhanapura in the territory of Pundravardhana. A limestone slab bearing six lines in Prakrit in Brahmi script, discovered in 1931, dates Mahasthangarh to at least the 3rd century BC. The fortified area was in use till the 18th century AD. Together with the ancient and medieval ruins, the mazhar (holy tomb) of Shah Sultan Balkhi Mahisawar built at the site of a Hindu temple is located at Mahasthangarh. He was a dervish (holy person devoted to Islam) of royal lineage who came to the Mahasthangarh area, with the objective of spreading Islam among non-Muslims. He converted the people of the area to Islam and settled there. 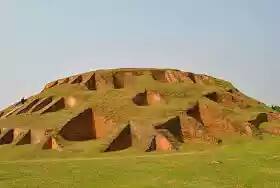 ISLAMIC CONQUERORS CENTRE OF LEARNING
Nalanda (Sanskrit: नालंदा Nālandā) was an acclaimed Mahāvihāra, a large Buddhist monastery in ancient Magadha (modern-day Bihar), India. The site is located about 95 kilometres southeast of Patna, and was a religious centre of learning from the fifth century CE to c. 1197 CE.Historians often c...haracterize Nalanda as a university as the school attracted scholars and students from as far away as Tibet, China, Korea, and Central Asia.

Nalanda flourished under the patronage of the Gupta Empire as well as emperors like Harsha and later, the rulers of the Pala Empire.
The destruction of Nālandā is in one of the greatest acts of cultural vandalism by Muslim invaders of India. The final dissolution of this once outstanding international university was evident in the 13th century when the world lost an unparalleled and inimitable institution of the ancient world that promoted globally, the path of virtue, compassion and wisdom.
In the year 1193, these invaders led by Mohammad Bakhtiar Khilji, attacked and burnt down and demolished this great Centre of Learning that existed for some 700 years. They destroyed its magnificent buildings and massacred its inmates, who at the time were mostly Buddhist monks.
Mirjah-i-Siraj the famous Persian Muslim historian in his chronicle Tabaquat-I-Nasiri has left a detailed horrid account of Khilji’s vandalism and violence. He reports that the gigantic library complex of Nalanda containing a total of over 9 million invaluable treasures of books, mostly manuscripts were set on fire and the burning continued for over six months.
He says that "…smoke from the burning manuscripts hung for days like a dark pall over the low hills”. This invaluable collection of works that were destroyed was the products of centuries of scholastic studies. A few monks managed to escape with a few manuscripts to Tibet, Nepal and other neighboring countries.
Mirjah-i-Siraj reports that thousands of Buddhist monks were burned alive and thousands beheaded as Khilji who tried his best to uproot Buddhism and plant Islam by the sword. He says that Buddhism virtually disappeared under the brutal impact of Muslim fanaticism. Nalanda which was a true spearhead of Buddhist learning in the world for several centuries became a deserted and desolate place and its ruins were covered by jungle.
Posted by Decoding Hinduism at 3:50 PM No comments: