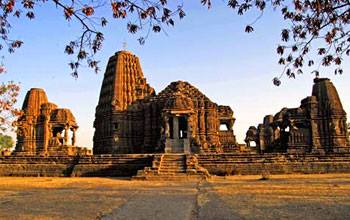 Gondeshwar Temple A.blackstone temple of the Hemantpadi style of architecture.
Ancient temples are treasure troves of history. These shrines were not merely religious sanctums but were pivotal centres for sharing knowledge and research on regional history, sociology, good governance and tradition.
Weathered by the wind and sun for centuries, one such splendid black-stone temple is Sri Gondeshwar at the north east of Sinnar town. The place is 26 kms Nashik and 190 kms from Mumbai. According to Cunningham's report, the earliest historical mention of Sinnar appears to be in a copperplate grant of 1069 A. D.
The temple is in the Hemadpanthi style of architecture, which was popularized by Hemadri Pandit, also known as Hemadpant, a minister during the Yadav Dynasty. The most striking feature of the construction was the use of locally available black stone and lime, glorifying the local craftsmanship.The degree of skill that went into making the carved panels and the entire design of the temple is awesome.
Lying around the crumbling remains of the temple walls and the entrance gate, this stone wonder is still the largest, most complete and the best-preserved example of the mediaeval temples of the Deccan of the Indo-Aryan style. It is a Shaiva Panchayatan, or a group of five temples within a large enclosure. The central shrine is dedicated to Lord Shiva and the remaining four around it are temples to Sri Parvati, Sri Ganapati, Surya Bhagwan and Lord Vishnu. The temple is truly unique in design, perfect in proportion and the stone carvings are exquisitely beautiful. 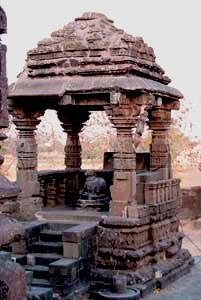 At its peak, the Seuna or Yadava dynasty (850 - 1334) ruled a kingdom stretching from the Tungabhadra to the Narmada Rivers, including present-day Maharashtra, north Karnataka and parts of Madhya Pradesh. The capital was at Devagiri, now known as Daulatabad in Maharashtra. The reign of the Yadava dynasty declined after the conquest of the Daulatabad Fort by Alauddin Khilji in 1294. Further conquest by Malik Kafur, Alauddin's general, in 1312 resulted in the killing of the members of the Yadava clan ending this illustrious dynasty. The contribution of Sevunas to architecture and art are significant. They opted for continuation of Dakhan.
Some sources claim that Raj Govinda of Yadava dynasty built this great temple. Yet another tradition assigns the building to Govindaraja, another Yadava king who ruled about the beginning of the twelfth century A. D.
The central shrine consists of a congregation hall or Sabhamandap and the inner sanctum Gabhara Griha, crowned by a tower-like Shikara enshrines the Shiva lingam. It is beautifully proportioned and bounded by three imposing pillared porches. Inside, the temple is profusely decorated. These black stone pillars are such that they appear to have been turned on a lathe. Similarly ceiling carvings are carved out of single stones.
The temple in the Deccan style is different from north Indian temples. Here, the shikhara does not have turrets grouped around the lower part of the structure. Instead the shikhara has a distinct vertical band rising upwards along each of its angles and taking the form of a spine or quoin. The space in between is filled with smaller reproductions of the shikhara. The pillared hall carved with tortoise, the Kurma Avatar of Lord Vishnu, on the ground, is small, elegant and unique in this part of the country. 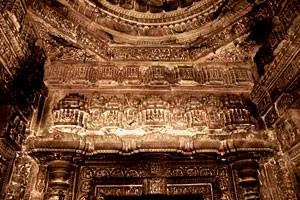 Facing the main entrance is a Nandi pavillion housing a stone
stone bull which is the vahan or vehicle of Lord Shiva. Gondeshwar templeThe striking feature of the Gondeshwar temple is the deep projections and the alcove on the wall surfaces. Rising upwards, these catch the natural light, or fall in deep shade. To counter this effect, a series of horizontal moldings have been laid across the entire composition. The entire temple was built on a raised platform to facilitate pradakhshina or circumambulation and provide a wonderful view of the sculptures all around the walls of the shrine. Even today, so many years after it was built, it is regarded as an adobe of Lord Shiva by worshippers.
Restoration work by Archaeological Survey of India has brought back the past glory of this architectural wonder and it acts as an eloquent reminder of our heritage.
indiatravelog.com
Photo Credit: Dhruba Banerjee
Posted by Pradeep Singh at 8:52 PM

Email ThisBlogThis!Share to TwitterShare to FacebookShare to Pinterest
Labels: emple of the Hemantpadi, Gondeshwar Temple