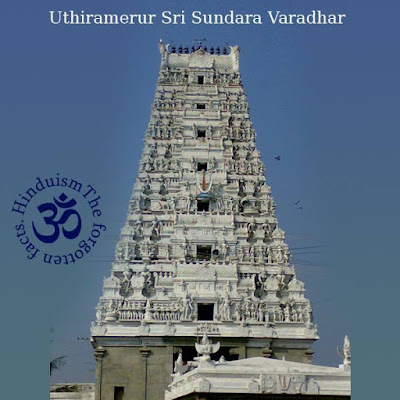 Uthiramerur village is located about 85 kms from Chennai off the GST Road. This is an ancient village well known for its temples, architecture, sculptures and stone inscriptions.

The main temple here is for Sri Sundara Varadaraja Perumal which is said to be built in 750 AD during Pallava rule. A king called Nandivarma Pallavan has donated this whole town to 1200 vedic scholars who settled down here. Those days this place was called as Uthiramerur Chaturvedhimangalam.

This is one of the few temples where you can have dharshan of Perumal in all his 3 forms.

The sanctum is built in such a way that all 3 forms of Lord Vishnu are set one above the other as 3 levels or floors.

The presiding deity is Sri Sundara Varadaraja Perumal here in standing posture along with Sri Devi and Bhoodevi in the first level.

There is a staircase on which one can climb with much ease to go to the next floor, just above the main sanctum. In this next level Sri Vaikunda Varadhar is seen in the sitting posture.

There is also Sri Dhakshinamurthy on the tomb facing south which is unusual in Vaishnavite temples.

In the third (upper most) level the Lord is in reclining posture on Aadhiseshan as Sri Ranganathar. Lord Brahma is seen on a Lotus emerging from Ranganathar’s navel. Lord Shiva is seen near the feet of the deity with the Deer and Mazhu (a weapon) on his hands.

Lord Ranganatha is seen blessing Markandeya Rishi with his right hand. Bhoodevi is in a praying gesture standing opposite Markandeya.

All the above 5 Gods are the principal deities here, though Sundara Varadhar remain the main deity.

It is also said that Pandavas lost their power and wisdom and after worshipping here, they gained all their power back.

This is one of and most ancient and wonderful temples filled with architectural brilliance with great sculptures all around.

Uthiramerur is also known as the birth place of democracy. The stone inscriptions in this town explains how constitutions were laid for democratic administration and also about electoral systems etc., People here have followed the election system called “Kudavolai” system for electing their favorite leaders in the local elections and the rules for nominating in elections and the voting systems which is the fore runner for today’s electoral systems.

Uthiramerur is well connected by road with buses plying from Chennai and Kanchipuram.

A must visit place for the lovers of temples, culture and heritage.
Posted by Pradeep Singh at 12:35 PM